A Lesson in Judgement… Romper Edition

I haven’t been doing a whole lot of sewing lately, what with all the work that has been going on around the house lately. Plus with things needing to be put in storage, my sewing area has slowly accumulated a lot of things that don’t belong there, and my desk space (which was already small to begin with) has dwindled over the past few months. All this to say, it’s made my sewing time feel kind of blah.

Although that hasn’t stopped me from accumulating gorgeous fabric here and there 😉 In an effort to start clearing some of the space around my sewing machine, and to try to get my sewjo back, I pulled out this fun triangle print from Blended Thread Fabrics, unfortunately no longer available, I was able to snag about 1 yard of it from the retail stocking a few months back. I knew as soon as I saw it that I wanted to make the youngest something… But I wasn’t too sure what yet.

Since custom fabrics aren’t exactly cheap, I knew I would have to think about it for a little bit. A few of my criteria’s though were that it needed to be a wardrobe piece that would blend with things that she already wore. Since she has a mishmash of different coloured tees, I knew pants were out. But a top could be easily paired with anything, so would a dress or romper. I heavily leaned towards making her either a gathered dress or an A line dress… But then a post featuring the alleycat romper popped up in my facebook feed and I couldn’t shake the idea of using the pattern!!!

Now here’s where that lesson comes in… I remember when the pattern was first released and everybody fell head over heels for it. And since then the pattern itself has grown and gotten more variations (a leotard, a maxi dress, etc) and really become a versatile pattern to own, yet when it was first released, I just didn’t see the hype! If I’m being totally honest, there was something about the look of the bottom portion I just didn’t like and it seemed to me to use SO much fabric around the torso that just bunched up in the crotch area.

But when I couldn’t shake the idea of sewing the fabric up using this pattern, I decided to let go of those past criticisms and dive in head first! If you know me, then you probably won’t be shocked, but I even opted out of making a test sew to see how I liked the fit!!! Even though her measurements for her width placed her in a much smaller size, I didn’t feel like playing around with length adjustments (remember, I haven’t been sewing much either lately and I didn’t feel like taking something on that was too thought consuming). So I cut out a straight 4, according to her height.

I was a tad worried about how the back would sit on her, since there’s no closures on the alley cat and the back opening is meant to fit someone that would be a bit ‘wider’ then her. Although it’s a touch loose, it doesn’t ever tend to fall off her shoulders or really move around and does sit nicely on her overall!

And as for the rest of the construction and pattern, it’s really well written out! And I’m looking forward to trying out the leotard and the maxi length dress options available. The bodice portion is lined so there’s no inside seam to bother this one and it gives it a really nice clean finish. Since the inside was so nicely finished, I decided to play around with my coverstitch machine to hem the sleeves. I got the machine about a year or so ago and haven’t had much time to dedicate to learning how to use it properly… You can see in some of these pictures that the hems have already started to come apart (I can’t believe I’m posting these pictures with all those loose threads!) but it is what it is. It’s been a learning curve and I know it’s not dialed in just quite right yet, but I think I’ve finally managed to get my settings close to right, and now it’s just working on ending my stitches in the round! I’ll just need to take some time and unpick these and hem it again.

I have to admit, I was happily surprised by the pattern! Once I let go of my cynicism, I came to appreciate it for what it was! Bonus, this child literally called it her secret PJs… if that’s not success I’m not sure what is haha. 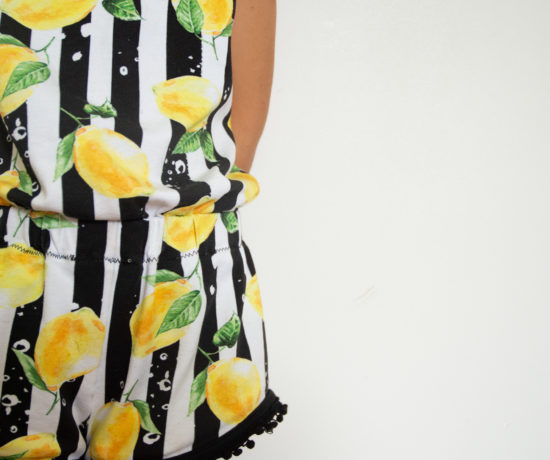